Bumper turnout after all places offered through Eventbrite are snapped up. 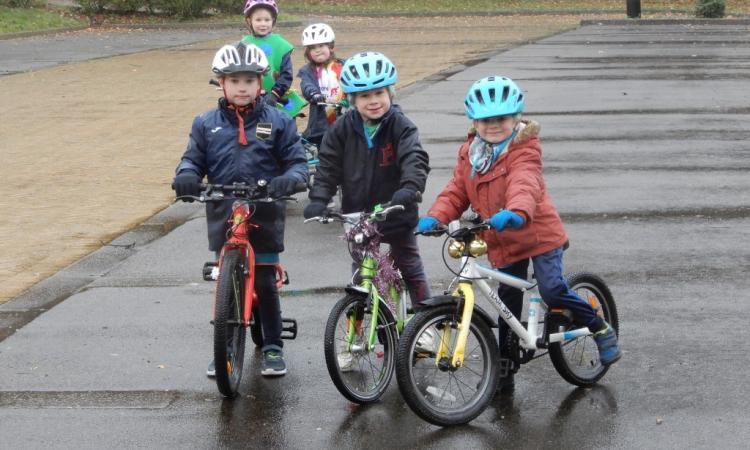 It was good to see so many riders apply for our last session before Christmas.... and then turn up in the wet to ride their bikes and scoff edible items that came pouring out of Andy’s Santa-like sack.

The three coaches were: Sean on the ground level with the older Bandits, then up the hill Richard (middle level) and myself (top level).

My group were the youngest who kicked off with a string of crazy tag races which involved either a parent running rather a long way (a whole lap in fact) or riders hopping a short distance.... all before getting on a bike and heading for the finish line.

For the first time ever in my years of Raiders, there was no final race as the tiles in the centre section of the car park zones were slippery

So we had a slow race instead. In fact three slow races. The last one of the three was the one that counted.

In wet and cold conditions the aim was to keep the children on the go, keep warm and have fun.

Skills were practiced through cycling around a prepared circuit, riding out of the saddle, weaving around cones and moving their weight either forward or backwards.

After a short break to have chocolate and mince pies- very important in the conditions, the session continued with the children cycling around a classic figure of 8 circuit.

The final part of the session saw the children take part in two races. Race one was a slalom race with two teams competing against each other. First team home was a winner. Both teams were very good so it was a draw! However, a call out to George, Tomas A and Elsie V who put into practice skills learnt.

The final race was a flat out speed race starting in pairs. Rueben Gutman did very well and took the checkered flag.