No cutting corners with our version of the square dance. 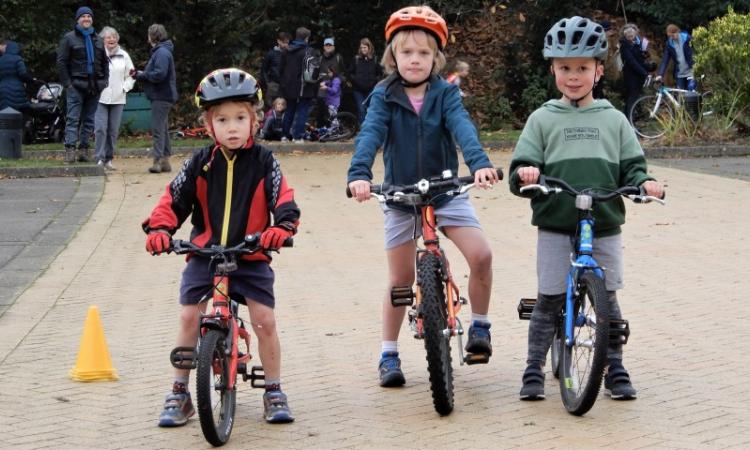 Wonderful – not only dry surfaces but also no leaves despite there still being plenty still left up on the trees.

The signs said the vaccination centre was in use but thankfully that was a false alarm. The oldest group of riders on the lowest level were with coach Tom Griffiths, while Richard Bradford took the middle group on the two halfway-up-the-hill levels, leaving the youngest with me up at the top.

Already laid out for them were two ‘paths’ to select from…. either a wide one for those not sure about their ability to ride in a straight line, or a narrow one for those with better steering skills.

The question ‘can anyone ride with one hand’ triggered one volunteer, who even at this young age showed he had the skill well and truly mastered.

Next up came limbo. The ‘big bike’ brigade did well, surviving as the bar came lower and lower, but in a two-rider final, it was the youngest rider with the smallest bike who won the day…. well done Huw Lusardi.

A completely new exercise for Raiders next.

I’ll call it a square dance. Along each side of a square were two lines of cones, just wide enough to ride in the middle of the two lines.

Riders had to complete the square circuit, staying within each of the four double lines, without knocking any one of the cones over.

As the problem is always turning in too soon, cutting the corner with the result that the back wheel catches an obstacle, we placed a sacrificial item (ie an unsuspecting adult) on each corner in the hope that riders would thereby be forced to go wide enough….. with big time penalties for riding over mum’s or dad’s toes.

After a few test runs, the timings got under way (with a 10sec penalty for hitting a cone/parent), with groups of varying sizes heading off together the results were: