The egg and spoon race involves riding one-handed.... and they cracked it. 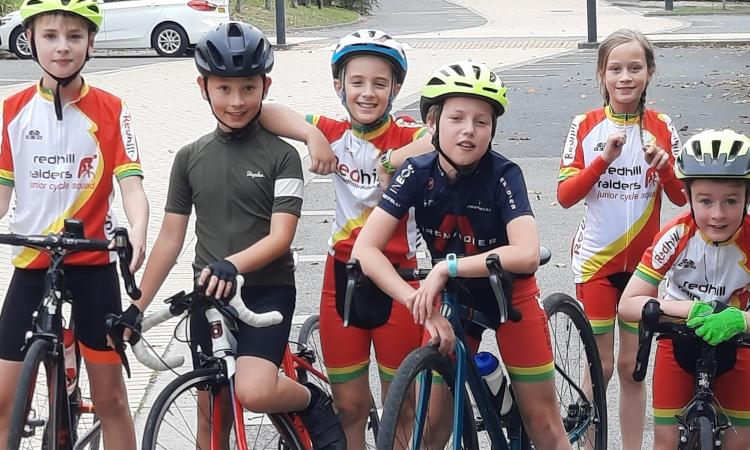 September 26: sunshine was the order of the day as we pedalled off today. The session was delayed by a week to avoid a clash with the Run Reigate event on the previous Sunday… but it was worth waiting for.

The 45 riders were divided into three groups with coaches Peter Loader (with the youngest group) and Tom Griffiths (with the middle group), both on different levels of the car-park up the hill, while the oldest group were with myself on the long stretch that makes up the lowest level of the SCC Woodhatch base.

Most of the oldest riders told me that they could ride with one hand…. so we did an egg and spoon race.

Divided into two teams, individuals had to hold a spoon in one hand while riding one-handed to a box where the challenge was to drop the egg into the box.

The first team to reach a score of six were declared the winners….. they had cracked it.

Next came the ‘prisoner and guards’ challenge where nine riders pedalled up and down in tight formation, riding in three lines of three, with the rider in the very centre being the prisoner who wants to escape through gaps between the guards’ bikes…. which means that unless the eight guards ride in a tight formation they let the prisoner leak out.

And they always do.

Nicki Day, a new parent, rode alongside, helping to keep the front line of three in check….. something of a baptism of fire for someone who has put their hand up to become a coach and so help us deal with our waiting list of youngsters who want to join.

As ever, everyone wants to be the prisoner. The strangest thing is the volume of noise it always generates….. it’s a right old shouting match.

Another exercise was the ‘slow-fast’ race. With everyone held by a parent and ready clipped in, they must first of all ride as slowly as possible to avoid reaching the ‘dividing’ line ahead of them within 30 seconds…. then after 30 seconds are up race to the finish.

Those who pass the dividing line in less than 30 seconds are eliminated. Picking up speed a second too soon repeatedly resulted in three of the whizz-kids not featuring in the race results at all.

As normal, we finished with handicap races where we had some very close results… well done.