We run four coaching groups for the first time.... to tackle the growing waiting list. 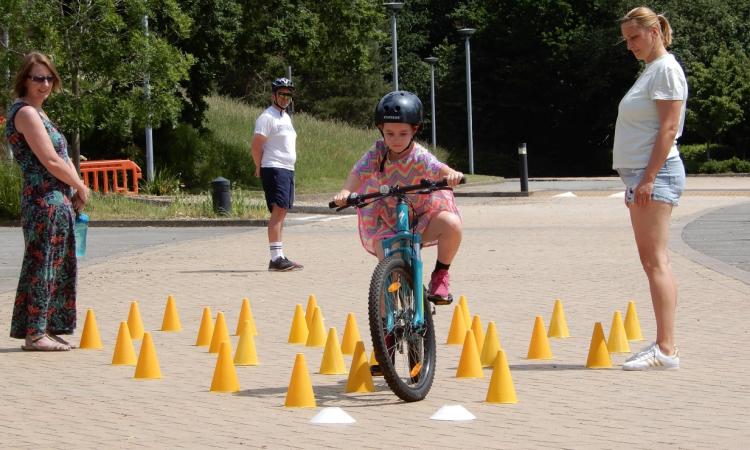 Sunday was our first attempt to run with four groups rather than three in order to boost capacity.

Sean Lamberth volunteered to take the fourth group for the oldest/fastest riders and they kicked off earlier at 10am.

That enabled the three other coaches Tom Griffiths, Richard Bradford and myself to run as normal at 12 noon with the others.

Reports from Tom and Richard below.

I was in the middle of the coaching sandwich with the middle group. Given the heat, it was a good moment to dig out a couple of gentle exercises…. (i) riding through the maze of cones without hitting them (or hitting the statutory straw man right in the centre in the shape of not-quite-totally-happy volunteer, dad Anthony Collins) and (ii) limbo which we did in the shade.

Le Mans-style races are a favourite (with me at least) so little races of two parts where (i) the riders first run to their bikes, held in position by a parent, then (ii) race to the finish line.

Next, to lift the fun level, the riders sat on their bikes waiting until a parent ran up and tagged them…. in fact hopped up (that made for even better fun, well at least for the kids and me).

Report from Tom from the ‘big’ group...

The older children were working on their confidence and competence riding in close proximity to one another.

The session started with a game of ‘chase the snake’, where the lead rider had to sprint off the front to rejoin the back of the line. The kids were on top of their game today, resisting the temptation to up the pace when a new leader came to the front of the group.

They then practiced moving through bottlenecks in pairs. By way of progression, the kids were encouraged to ride one-handed, placing the other hand on their partner’s back as they navigated the bottle neck. Ollie & Olivia and Isabel & Isabella were superb at this.

The planned end to the session saw a team pursuit, with teams of three putting their group riding technique into practice, racing against another team as a trio.

However, it turns out no session is complete without some full gas individual laps! The coach caved in by setting up a 2-lap race. Tom took the prize, from Alex and Isabella in an exciting finish. And the coach *just* made it home in time for kick off in the England game.

Report from Richard The Youngsters

The session focused on cycling in a group, controlling the speed of the group and getting used to cycling close to one and other. There were also plenty of breaks for water and snacks.

To help develop core skills, cycling in pairs, riding off the front of the group, riding in a peloton and communicating to one and other to adjust the speed of the group were all practiced.

In the paired rides, Emily and Noah were very good at talking to one and other and Daniel was good at leading the peloton and keeping a steady pace.

The session ended with a Hares and Hounds pursuit race which was just won by Niamh.