Coach tells his son his coaching plan in advance, then regrets it. 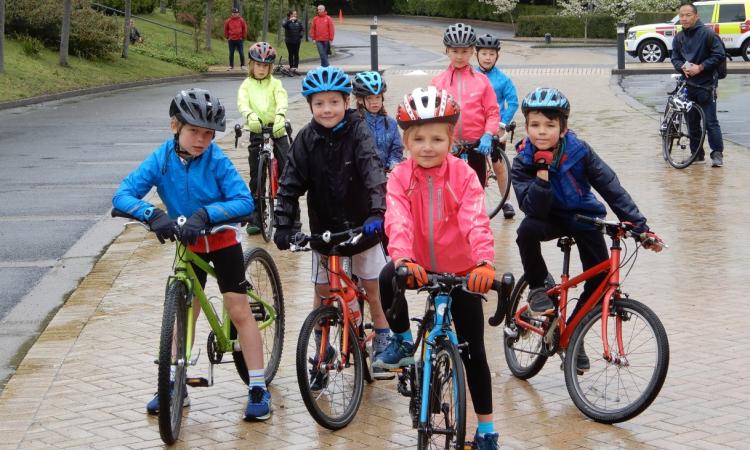 Another full house….. and a waiting list that gets longer.

During the informal warm up, one boy took a tumble in the wet and the next rider, Noah Bishop, pulled up next to him, got off and helped him up before pedalling off himself.

The plan for the 15 riders in the oldest group was for about six different exercises but the first two taxed their brains so much that we never got any further than ‘snaking’ and then 'orbiting'.

Orbiting seemed to be stuck in disarray… but by pulling out the most gung-ho tearaways and sending them off to just do laps on their own, the others who wanted to learn then worked harmoniously to make circles round their little group, one rider at a time, in sequence.

After help from three engines (that is to say adults each on a bike moving at a steady pace) came the challenge…. the riders all on their own, but now riding in smaller groups of just four.

Off they went and we started to keep a count of total orbits per lap. The surprise was that the two best scores, 10 orbits and 11 orbits, came from the two teams of youngest riders.

Photo: the eight stars….. the front four managed 11 orbits while the foursome behind them who racked up 10 orbits. Well done, you all nailed it.

What a gripping race that was. Teddy was off first and his advantage shrank rapidly over the first two laps as the two Harrys hunted him down. But then they slowed slightly and Teddy speeded up slightly so that as they made a final push for the finish line, the first two were side by side. So good to watch.

In wet, slippery and cold conditions, the younger group session focused on:
1)Riding position and body movement - cycling around the track at a moderate pace, practicing standing up on the peddles, moving body weight forwards/backwards and then to the side.

2)Balance and Corning - we then used these skills to help us safely corner keeping the bike mostly in control!

The final part of the session was using all of the above to navigate a circuit and ride under the limbo pole. Everyone had fun and managed to get under the pole.

There was no race this week to end the session as the rain started again and the little ones were keen to finish whilst ahead.

A wet weather session was devised for the middle group which focused on balance and body positioning. It started with ‘slow races’ and a highly competitive event which saw children gradually eliminated as they navigated their way around a congested (and contracting) circle. We moved onto one-handed riding and looking over the shoulder before a relay event to finish things off.

The relay pairs were established through a seeding race, pairing faster and slower riders for the main event. Alex and Sasha emerged victorious, holding off the challenge of Danny and Louisa (2nd) and George and Zara (3rd).

However, the shine was taken off the victory when Alex admitted on the way back to the car that he’d strategically soft-pedalled in the seeding race in order to get a faster partner.

Note to self: do not reveal session details to son in advance.