A sunny Sunday in April: it's a full house as we get pedalling again after lockdown. 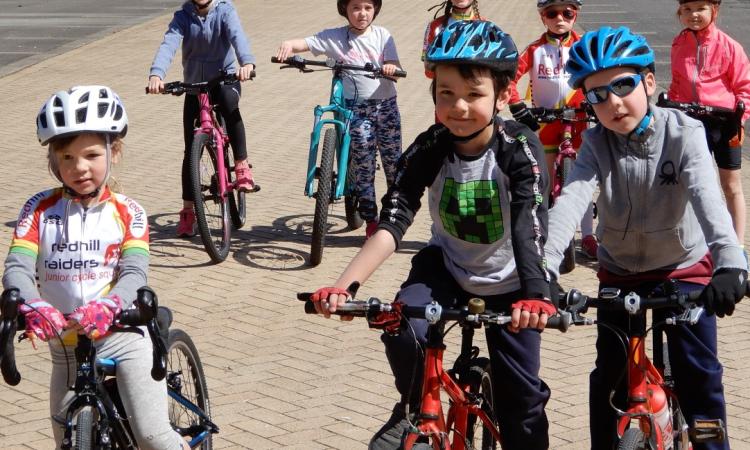 The gates opened and the younger members of the Redhill Raiders junior cycle squad came pouring in…. and what a welcome back as the surfaces of the parking zones on all five levels had been power-washed off and left with that ‘good-as-new’ feeling.

The sun got warmer again and off came the layers of clothing as we got back into the swing of things.

Spinning out our 45 riders into three groups of 15, based on age and ability, worked well as we ended up with the youngest riders to up to the top level with coach Tom, the oldest riders on the bottom level with coach Richard...... leaving a middle group in the middle with me.

There is a report by Tom (below) and another report by Richard (also below).

Normally I do ‘bin races’ with just two riders paired for three little laps, but with 15 on board it was more a case of five at a time. Since there is as much time cornering as riding on the straight, it’s a case of having the inside pedal up so as to hold speed without the pedal hitting the ground.

Some work still to do on that one.

Another exercise calling for the same was the downhill swoop where riders dropped down the hill by two carpark levels, pedalling if they wished for more speed, then going as far as possible on the flat while freewheeling….. a case of developing confidence on descending and then cornering at speed.

Calm down…. I can explain. As many as 10 of the middle group of 15 were girls and so the boys’ race was a bit thin on the ground, and so when Tabitha and Hannah chimed up together wanting another race it seemed a good idea to open it up to everyone who wanted to join in.

Although Holly was the smallest/youngest, she is already a veteran of two seasons of BMX racing, so she has a good level of endurance and bounced back right away from her efforts in the previous race.

Report from Tom
The youngest group worked on mounting, dismounting and braking on the higher levels of the car park - preparing themselves for future cyclocross careers!

There was a wide mix of abilities, with the older children focusing on speed, whilst the smallest mastered the basics. Lots of fun was had in the braking zone, particularly when an obstacle was added requiring the kids to lift and carry their bikes. The denouement of the session saw a series of ‘cats versus dogs’ pursuits with some frenetic racing!

The group were a pleasure to work with, listened to the coach’s advice and gained confidence leading to lots of noticeable improvements in speed and technique by the end of the session.

Report from Richard
The older group focused on two core cycling skills. The first area looked at climbing and descending in a controlled and safe manner. Using the hill next to the Cannon office we practiced individually and then in pairs, thinking about gear selection, body position and looking ahead.

The second skill area focused on riding as a group or peloton, where the riders needed to communicate with one and other, think about distance between bikes and controlling their speed.

The final part of the session was the real fun. As the group had lots of energy we did a sort of extended team pursuit race with two teams racing against the clock, but having to work together to support one and other as the finishing time was based on the final rider over the line. Also, to make it more fun or perhaps harder the circuit was around the lower level car park plus the hill! Over five laps both groups did fantastically well and were separate by just over a second!!!

All the children focused and really engaged with the session, worked hard ( particularly going up the hill). It was a real pleasure to coach them.