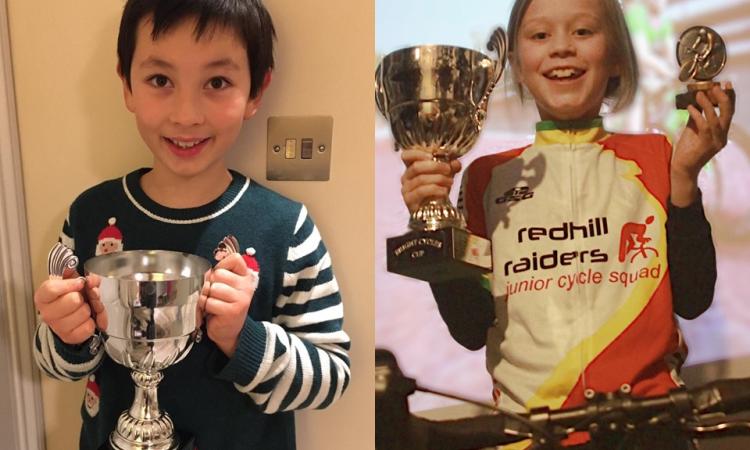 Tabitha missed the final Raiders session of the year because of coronavirus…. a teacher at school had tested positive. That meant the plan to present the trophy needed to be changed, the result being that chairman Andy Adshead played the part of Santa and delivered the award in person.

The request for a photo has resulted in this splendid shot above.

“A big thank you for the great surprise. Tabitha is absolutely over the moon.

“We all had to sit around the dining table with the trophy on show.

“This year has been very bizarre but the efforts for the Redhill team have been absolutely amazing.

“The Raiders sessions are such a great opportunity for the children and I know Tabitha has benefited greatly from everything you all do.

“Looking forward to hopefully moving back to normality in the New Year.”

Henry Man (age nine) collected the trophy for the Rider of the Year - Boy.

"He is really chuffed to bits!" was the immediate feed-back from Henry's dad Julian. "On behalf of Henry, and myself, many thanks to the entire team."

"Henry has absolutely deserved the boys rider of the year award not only for has amazing ability when it comes to riding, but also for the way that he takes on board any coaching points and puts them into play, as he clearly wants to improve; which he has to a fantastic level.

"This coupled with his genuinely kind, polite and happy nature, we as coaches are delighted that he has received the recognition for his hard work that we've all seen at 'Canon'."

When Raiders' sessions vanished during the summer, Henry kept the pedals turning with a charity-raising endeavour lasting all through the month of May. Here's what his JustGiving page said:

Henry is fundraising to help the staff at East Surrey Hospital and Surrey & Sussex Healthcare NHS.

Wonderful..... all of us at Raiders say well done for that.